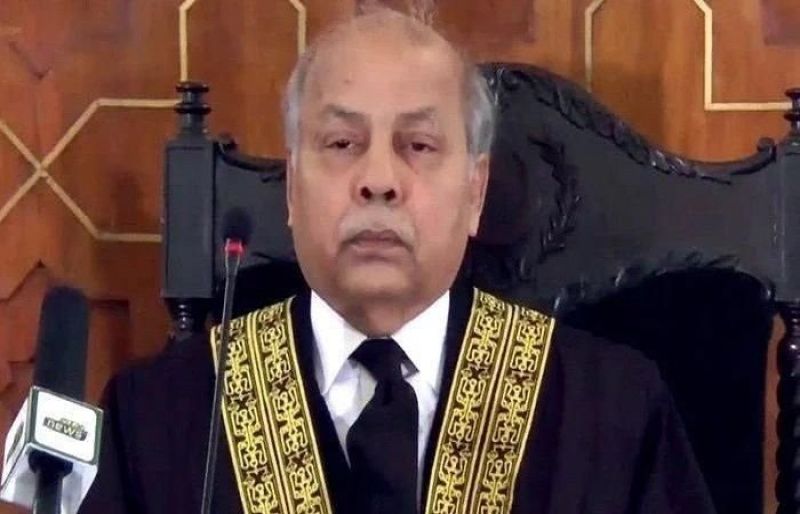 Chief Justice of Pakistan Gulzar Ahmed chastised a senior member of the Board of Revenue (BoR) Thursday at a hearing on the computerization of Sindh’s land records, telling him that half of Karachi has been illegally occupied.

The chief justice scolded the senior member of the BoR for presenting a defective and unsatisfactory report, telling him to “stop feeding us lies and stories.”

“You are neither a Munshi, nor a Babu,” said Justice Gulzar.

During the hearing, Justice Gulzar reprimanded the BoR representative, stating that more than half of Sindh’s land is illegally occupied.

Angered at the pictures attached in the report submitted by the BoR, Justice Gulzar said, “Give this lollipop to someone else, not us.”

“If you do not follow the court’s orders, you can be jailed for contempt of court,” Chief Justice Gulzar warned.

Justice Aijaz ul Ahsan questioned the revenue board member about encroachments in Hyderabad, Sukkur, and Larkana.

Speaking about Karachi, Justice Aijaz stated that it is a significant concern because nine encroachment cases alone relating to the city have been filed already.

“Everywhere there are good and bad individuals, but sadly, we have dirty people,” stated Chief Justice Gulzar.

Justice Qazi Ameen, who was also part of the bench hearing the case, reminded the senior member of the BOR that he is an employee of the government, and not of a private individual.

Slamming the revenue board official, Justice Gulzar said not a single structure on the encroached land has been demolished by authorities.

He lamented that forged papers are issued and illegal structures have been constructed on the city’s University Road, the Super Highway, areas near the airport, and Malir.

“Houses have been built within the Malir River area, on government land and areas designated for parks and charitable ventures,” Chief Justice Gulzar stated.

He ordered the BOR’s senior member to reclaim illegally occupied government land from the occupiers and provide a report within one month.

“Go, do your job and inform the court about the number of illegal structures you have demolished [in future hearings],” directed the chief justice.

“This is a two-week job,” Justice Qazi Amin remarked.