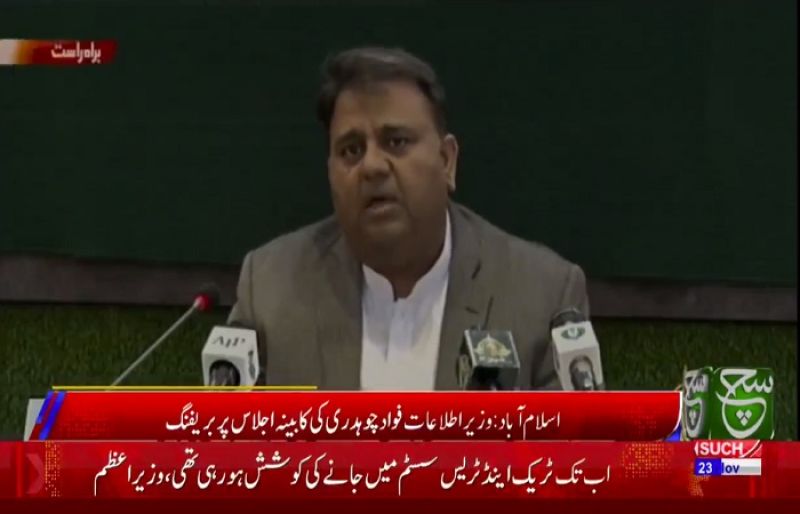 Federal Information and Broadcasting Minister Fawad Chaudhry alleged on Tuesday that the “PML-N’s Maryam Nawaz group” had formed teams in the party to make fake video and audio clips in order to bring senior officials, including judges, under pressure.

The minister, who was addressing the media after a federal cabinet meeting in Islamabad, made the remark in reference to a leaked audio clip, purportedly of a conversation between former chief justice of Pakistan and an unidentified man regarding PML-N leaders Nawaz Sharif and Maryam Nawaz’s trial prior to the 2018 elections.

“And now since the clip has been proven fake, [it’s clear] that the only objective behind it was to pressurise the judiciary,” he commented. “They (the PML-N) started the ‘mujhe kyun nikala’ (why was I ousted) in the past to pressurise the generals in armed forces. And when case proceedings against (PML-N leaders) are under way [in the court], they are running a similar campaign, believing that they will be able to pressurise judges.”

But, he added, the judiciary would “reject” this, adding that Maryam had been involved in getting fake clips made in the past as well, not just to pressurise high-ups but her party as well.

“I can’t think of anything similar to what the PML-N’s Maryam Nawaz group is doing,” he said, adding that he condemned it and hoped that the matter would reach its logical conclusion.

The minister said the government would follow whatever instructions the court would issue in relation to the matter.

Speaking about an event in Islamabad and the Asma Jahangir Conference in Lahore, which led to a controversy after PML-N supremo Nawaz Sharif’s address via a video link was disrupted when the live stream was abruptly stopped, the minister said the seminars were held with foreign funding.

“Today, in the cabinet meeting, [Human Rights Minister] Shireen Mazari urged the Foreign Office to discuss the matter with the donors of the events under section 41 of the Vienna Convention,” he told media persons. “The Foreign Office will devise a policy on this.”

Chaudhry said the federal cabinet had formed a committee to deal with the nitty-gritties of using electronic voting machines in the next elections and corresponding with the Election Commission of Pakistan (ECP).

He added that the government would provide all the needed assistance to the ECP in this regard, while stressing that EVMs would surely be used to cast votes in 2023 elections.

Responding to criticism by the opposition on electoral reforms, he said the PML-N should be grateful to the government as it would be for the first time that Nawaz Sharif’s sons, who had been living outside Pakistan, would be able to vote in the general elections.

He also complained that a rise in the prices was always highlighted in the news but not when prices reduced.

The price of sugar, he said, was expected to decrease in the coming days and those of tomatoes and onions had already decreased, added.

Admitting that fuel and electricity prices had increased, he said the rise could be accommodated since the prices of edibles had decreased.

“And two big programmes that we will introduce will make the situation better.”

However, he added, “the biggest issue in this regard is of Sindh, particularly Karachi.”

After the 18th Amendment, the minister explained, the federal government could only devise a policy and taking actual steps to address the issue was the provincial government’s prerogative.

“The Sindh government fails to take timely decisions, which creates a crisis.”

Moreover, Chaudhry said, a major chunk of the Sensitive Price Index was based on data from Karachi, where prices were higher than in the rest of the country.

“And then it will be alleged that democracy is in danger,” he commented.