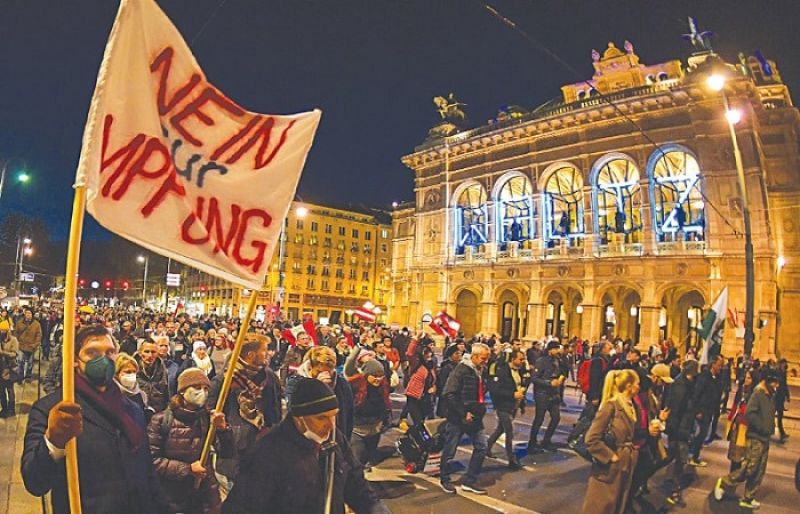 Thousands took to the streets in Austria and Australia on Saturday as anger mounted over new Covid restrictions imposed to tackle a resurgent pandemic, sparking overnight riots in a Dutch city and a French island.

Europe is battling a fresh wave of infections and several countries have tightened curbs, with Austria on Friday announcing a national partial lockdown — the most dramatic restrictions in Western Europe for months.

Other nations on the continent have resorted to less severe restrictions, often choosing to ban unvaccinated people from venues like restaurants and bars.

Some 10,000 people marched in Sydney and there were protests in other major Australian cities against vaccine mandates, which are not universal and have only been applied to certain occupations by state authorities.

There was also arson and looting overnight in the French Caribbean island of Guadeloupe where a night curfew has been imposed.

Thousands gathered on Saturday in central Vienna near the Chancellery, responding to a call by the far right FPO party, to denounce the new measures.

They held up banners decrying “Corona dictatorship” and slamming the “division of society”.

“It’s not normal that the government deprives us of our rights,” said 42-year-old Katarina Gierscher, who travelled for six hours to get to the rally.

“The government wants to divide us. We must remain united.”

From Monday, 8.9 million Austrians will not be allowed to leave home except to go to work, shop for essentials and exercise. The restrictions will initially last 20 days with an evaluation after 10 days.

Vaccination against Covid-19 in the Alpine nation will be mandatory from February 1 next year.

Organisers cancelled a Dutch protest on Saturday but a few hundred people still gathered in Amsterdam and a similar number marched through the southern city of Breda.